A potential disaster creates an opportunity for expansion

Churchill executives told us that the campaign was so popular that customers were calling in to find out when the next "episode" was coming out. The number of new investigations continued to rise sharply for months and allowed them to expand operations into all 50 states, including Alaska and Hawaii.

The Case Studies campaign completely reversed the decisions of the insurance companies. Within 3 months Churchill  went from operating in 7 U.S. states to all 50. The number of new claims received went highest ever in the company's history.

We have been working with Churchill for over 20 years since their inception in California back in the early 1990s. We designed their logo, website and brochures, all of which helped to kickstart the company.

LOCATION: Based in Florida/ USA Nationwide 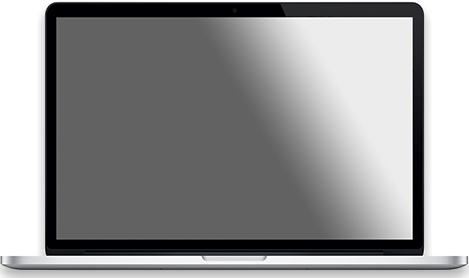 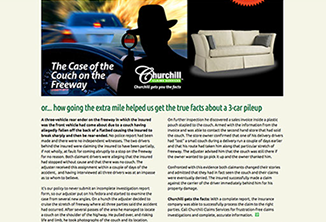 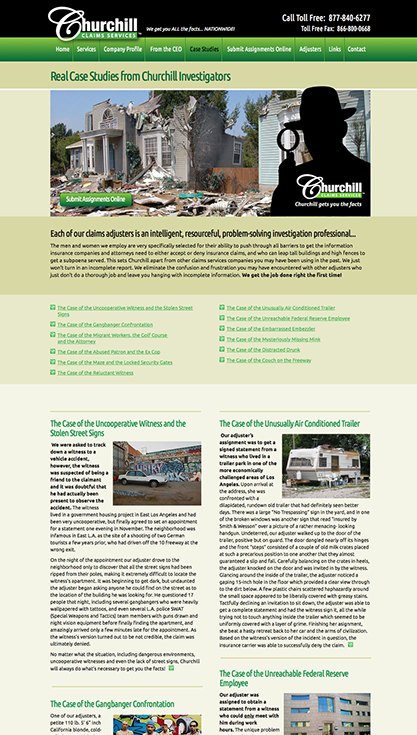 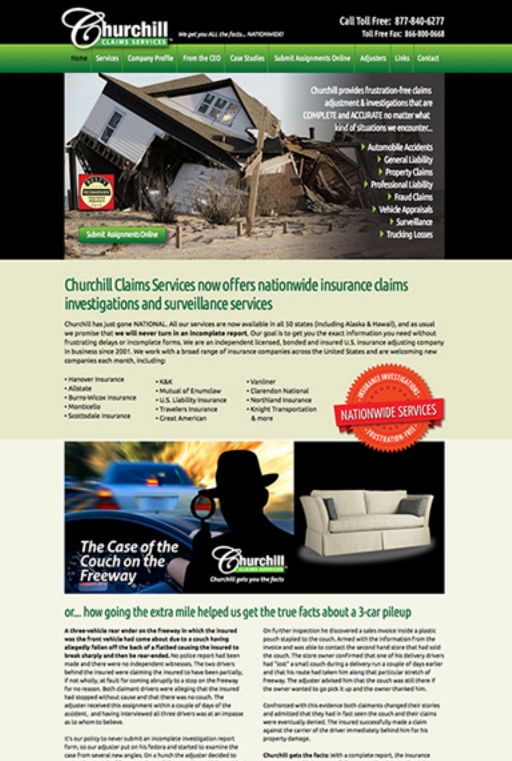 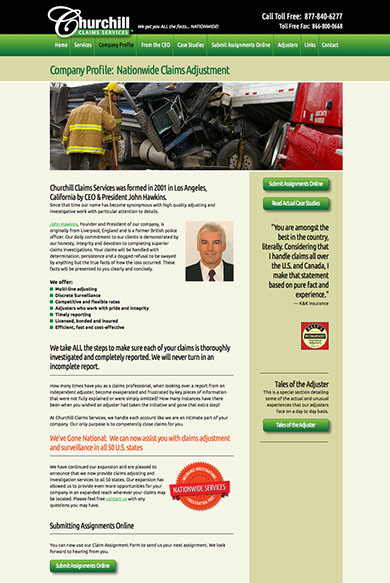 THE COMPANY: Churchill Claims Services is an independent insurance investigation company based in Largo, Florida. They provide nationwide investigation services to insurance companies to verify if insurance claims are valid or bogus, including photography, witness interviews, video surveillance, etc.

THE SOLUTION: Churchill executives assured me that they NEVER turned in incomplete reports, so this was not a valid complaint they'd ever received. To solve the PR problem, we created a "Churchill gets you the facts" campaign by creating a series of Case Studies of interesting investigations that detailed the problems encountered and how the investigators were never stopped. The reports were written up as short "detective novel" episodes, and a branding was created showing a fedora-wearing silhouette of an investigator. These Case Studies were sent out as individual emails and also added to the Churchill web site. A complete redesign and facelift of the site was done at the same time, refocusing the marketing around the new campaign.

Logo/branding created for Churchill Claims Services by Design Strategies circa 1994. 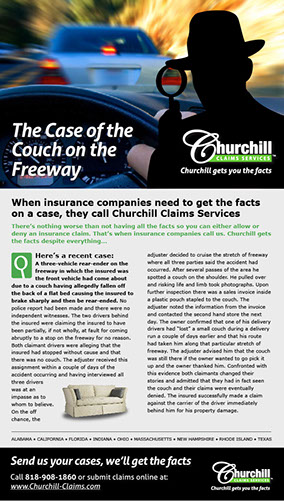 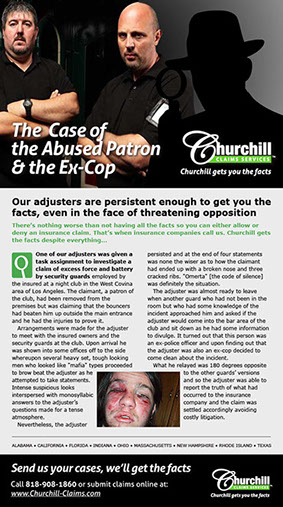 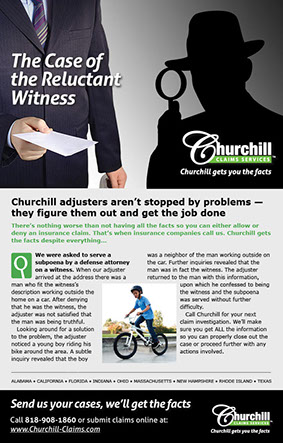 THE CASE STUDIES EMAIL CAMPAIGN: We worked with Churchill to produce a series of 15 Case Study emails that were sent out to insurance companies using the "Churchill gets you the facts" branding. Each one of these contained an interesting writeup of the problems encountered by a Churchill investigator and how he/she was able to work out a solution to make sure ALL the information about the case was gotten. A few weeks after the email campaign was kicked off, the number of new investigation requests started to skyrocket! Instead of just telling people how good Churchill was, the emails actually proved the point in an interesting and fun manner. The campaign eliminated all objections from the insurance companies, and instead of losing accounts, Churchill expanded its business many times over. 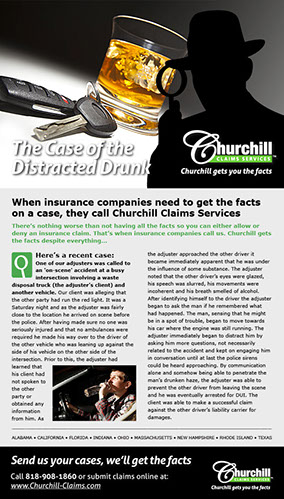 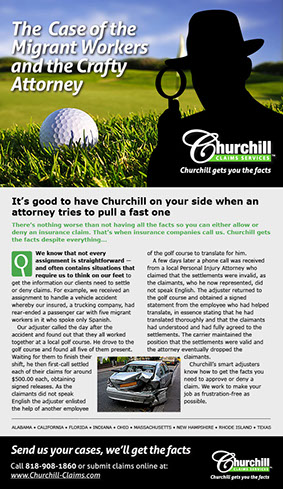 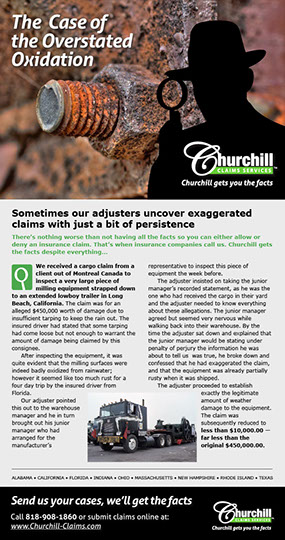 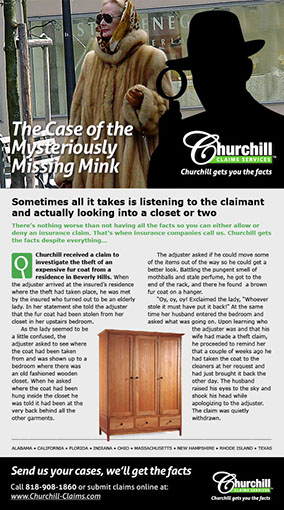 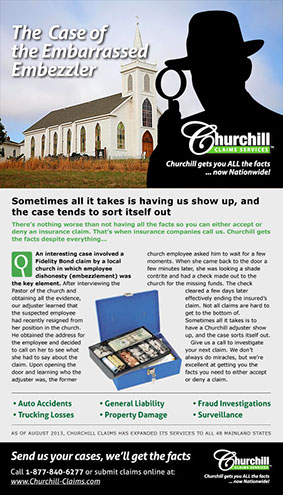 "You wouldn't believe it... our sales were bottoming out — and then after the campaign they just went up and up and up into a whole new range.

"We can't thank you enough for the help you gave us!  The case studies solution hit home with our clients and even had them calling us to ask when the next installment was coming out. They were actually calling to be advertised to!"

Contact Design Strategies for more information on how we can help your company increase its sales leads and income: 727-466-6888

Running a company in today's economy can be hard work. Let us help make your job easier by providing design, marketing and branding services for your website and printed materials. We've helped companies across the U.S., Canada, the UK, Europe, South Africa, and Australia to greatly expand their sales and customers. Give us a call or fill out this form and a representative will be in touch with you shortly. 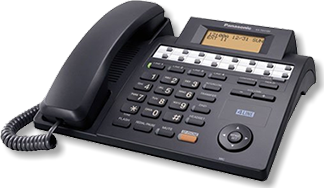 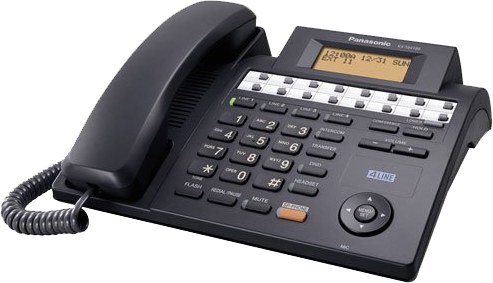